Warning Cookies are used on this site to provide the best user experience. If you continue, we assume that you agree to receive cookies from this site. OK
Currency:
Euro (€)
Pay Online! Click here

TASK Ltd is a leading provider of security systems, telehealthcare and 24-hour monitoring. Headquartered in County Meath Ireland, the company also has an office in the Titanic Quarter, Belfast. Three divisions operate within TASK; TASK Community Care, TASK Security Systems and TASK Monitoring. A dedicated R&D team also operates in-house, where both hardware and software engineers design and develop IoT (Internet of Things) security, and monitoring technologies. TASK Community Care was Ireland's first telecare company and provides 24-hour monitoring to tens of thousands of clients, throughout Ireland and the UK.

Founder and Managing Director, Gerard Bunting, established TASK Ltd in 1974 as a security systems company. The transition into health and community care took place later that decade, when the company played a pioneering role in developing and providing innovative 'nurse-call' technology solutions to Irish healthcare organisations, including the National Rehabilitation Board.

Socially monitored alarms and telecare were first introduced to Ireland in 1991, by the launch of a jointly operated scheme between Dublin City Council and the Health Board. The scheme provided funding for monitored alarms to vulnerable members of the community. Monitoring of the alarms was initially carried out by Dublin Fire Authority, but was transferred to TASK Community Care later that same year. This was the beginning of TASK, as Ireland's first social alarm and telecare company, introducing what was then a novel form of care into the home. Today, telecare is recognised, as a welcome alternative to hospitalization and more expensive forms of care.

Following the success of the scheme the Irish government further rolled out social alarm and telecare monitoring in Ireland. Senior’s Alert Scheme (SAS) grants are now administered by Pobal on behalf of the Department of Rural and Community Development. The grants cover the cost of having a socially monitored alarm installed, and are available to people aged 65 and over.

Since the introduction of the joint scheme, monitored alarms and telecare have proven to be a sustainable way for government to save on community and healthcare costs. It is estimated that this form of preventative care, saves the Irish health sector tens of millions of Euro annually.

2009 - Opening of Belfast office in the Titanic Quarter, to meet the demand for our products in the North of Ireland and further afield.

TASK now provides security, telecare and 24-hour monitoring for tens of thousands of people in Ireland, the UK and further afield. 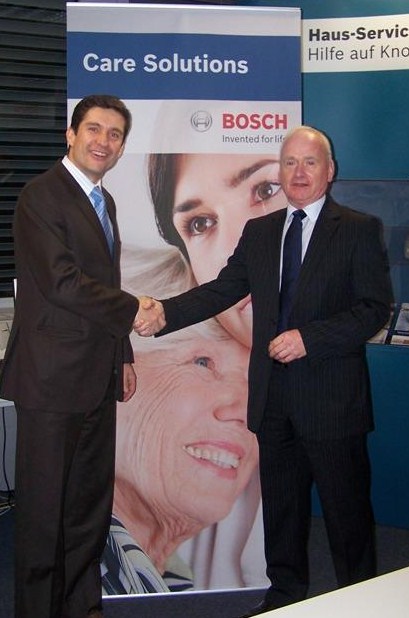